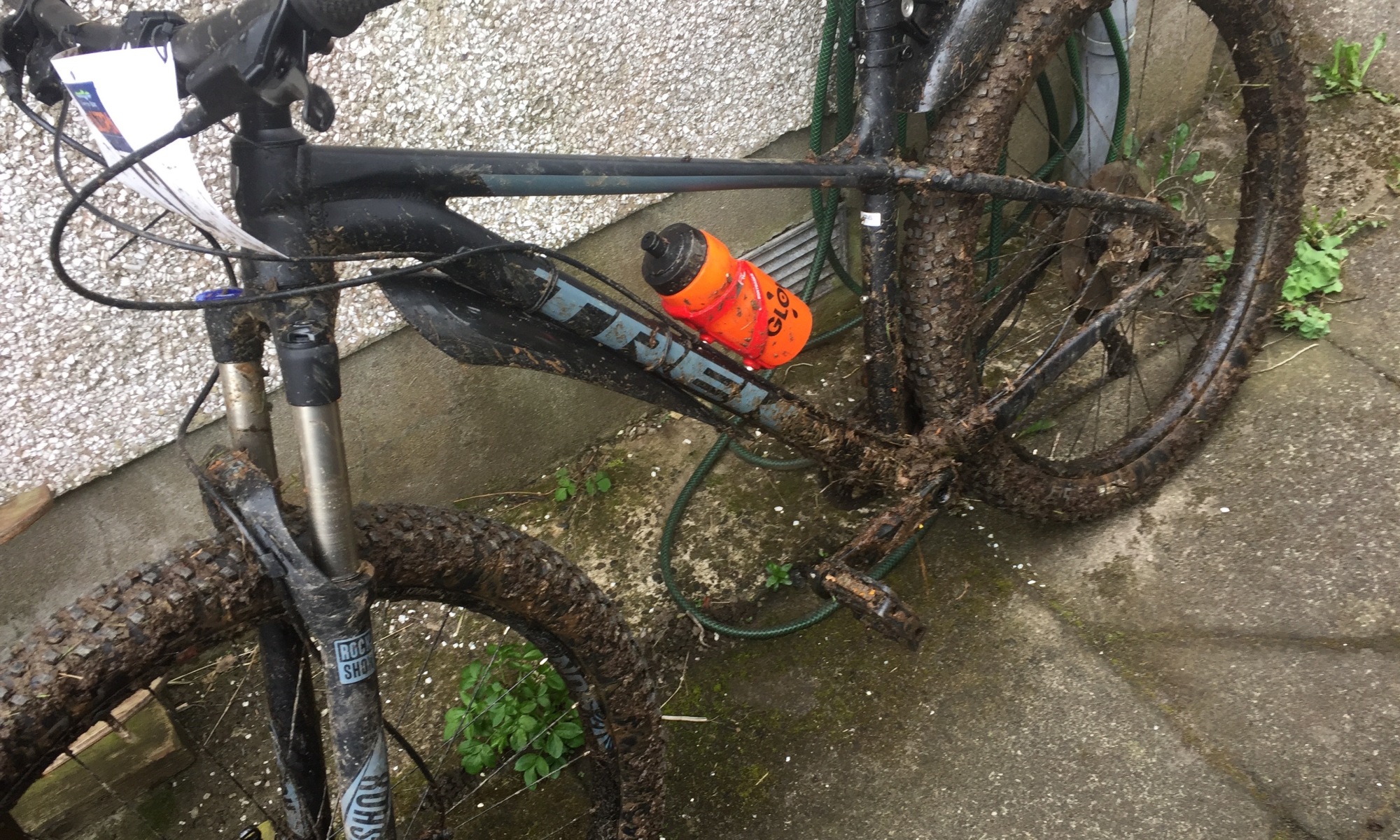 So Saturday was the Kintyre Way Ultra Cycle ……….

The running race has been going on for quite a few years but the cycle element was just added last year. I knew about it then but too late to put the time on the bike to be able to get any fitness for it ( I am so glad that I didn’t enter last year! ) However I knew that I really wanted to give it a shot so signed up as soon as I could for this year.

Wasn’t really till the beginning of this year that I started thinking about the training for it seriously and in combination of starting to cycle to work. In January I really wasn’t sure that I was going to be able to get fit enough then I got the news about my dad so wasn’t sure whether would be able to take part for other reasons. Unfortunately most of my training really was just the cycling to and from work which made a big difference but needed to be able to do a lot more. So I then wasn’t sure how far I was going to be able to get. However about a week before the race I was thinking I was going to have to pull out to spend time with my Dad so actually just getting to the start line on Saturday I was very happy about. 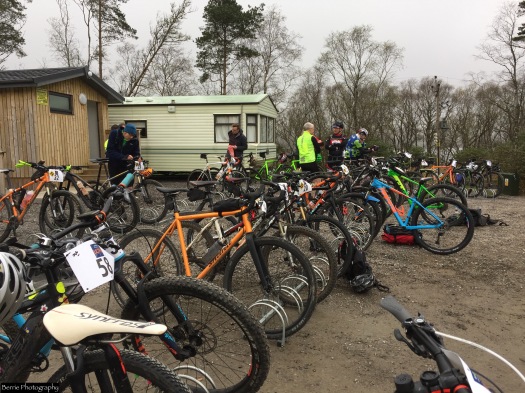 The second photo is the top cyclists from last year starting first, can be reassured that I never saw them again after that was taken! 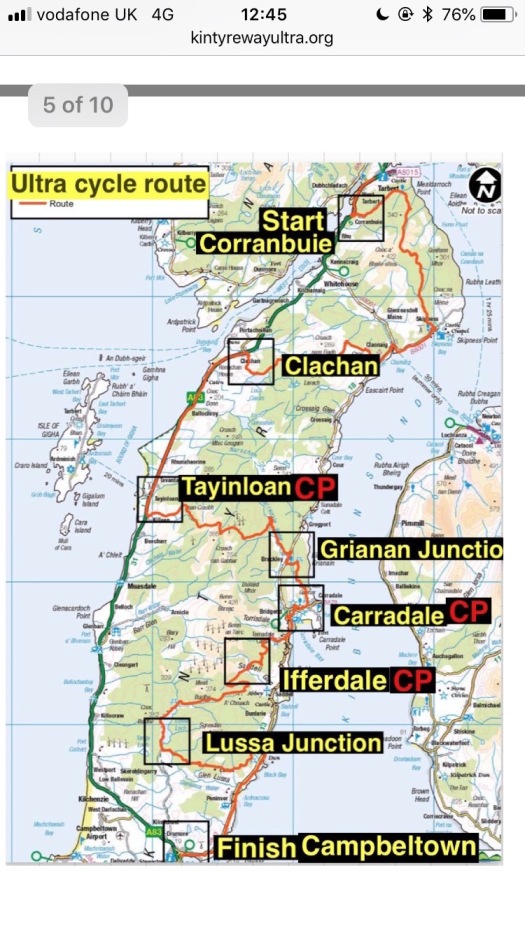 That is the map of the full route, it is 74 miles so no mean under taking. As I said I was just happy that I was actually getting a chance to start it and had no idea how I was going to get on. My initial aim was to make it to Tayinloan and anything after that was a bonus. then it turned out that Kat was marshalling just past there so was going to try to make it to at least her.

Pretty much the first 6 miles is all uphill and it is a killer. I managed it which a few months ago without the cycling to and from work and a few other things I wouldn’t have at all but speed was not on my side.  Not long after starting it I knew that I wasn’t going to finish it and set my sights on making it to Kat however after a couple of hours my site was set on finishing on Clachan and that is where I made it to. 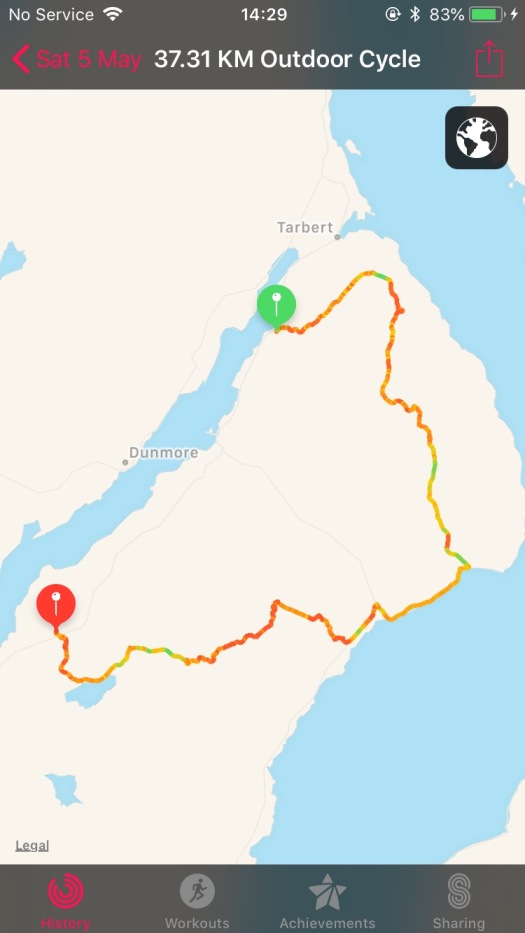 Between Corranbuie and Clachan there are some very very very boggy sections and they were very much that on Saturday, the worst I think a lot of people had seen them. Pushing the bike through ankle deep bogs and down very muddy hills defo saps away at your energy.

Unfortunately it was a very misty day at least in the morning so there wasn’t much to look at apart from the track/path that you were on. Would have been great to have the amazing views that I know that the area can offer but it wasn’t to be.

4 and half hours it took me to get to Clachan, I was at the back from the start and cycled a lot of the way with the sweeper however I am happy with that. It is a lot better than I could have done before and especially last year.

Getting to Clachan meant that I could head back up to the house get some food, wash the bike and myself and then enjoy the afternoon. At that point the sun came out and was very content after biking 23 miles to sit in the sun and enjoy.

Stepping into a Monday with sunshine and colour #abstractart #colour #sunshine #mondaymotivation #monday #bestfootforward #abstract #windowstickers #sun #light #lightandcolor
#irvinebeach #goprophoto #sup #transman #ftm #paddleboarding #goprohero7 #beachlife
First time this year that have been out on my bike. Reasons being COVID, lockdown, weather and mental health however also very easy to use those as excuses to give myself for not getting out there but not going to be hard on myself or best myself up about it cause that won’t help. The main thing is that this evening I did go out in my bike and felt great to be back on it defo a must for my mental health as well as physical. Near me there is a recreational area Ashgill which has a bike track and pump track in it. As you can see from the photos the pump track is looking pretty sorry for itself, would be great to turn that around one for myself but two for everyone else and just the area as well. Today I filled up a plastic bag of rubbish but is going to take many trips of doing that. I plan to go there more and do something each time but would be great to get some help for this whether that is helping yourself, telling someone about it, sharing this, using the track or just whatever. Obviously keeping yourself safe with COVID, not getting hurt with the rubbish and general safety with being on a bike. Would be great to turn this back into a proper pump track. #ashgillrecreationcentre #ashgillpumptrack #pumptrack #mtb #mtbscotland #rubbishclearance #glasgow #cleanupglasgow #mentalhealth #mtbformentalhealth #mtbglasgow #pumptrackglasgow #scotland
Haven’t don’t much with my photography in the past few weeks and for that reason haven’t posted much on here or my blog. Have been off work again so far for just over a month though will be off for longer still before going back. So past few weeks have been focussing on what has felt right for me to do reading, journaling, started meditation again and generally just taking it day by day with dog walks , watching tv and cooking. Photography hasn’t been apart of what has felt right to do until now. Headspace has improved day by day and now back in the place where my photography is important to me and something I want to do. Daffodils are one of my favourite flowers and are the start of spring for me so seemed right for that to be the first photo of me getting back into photography. Things are getting brighter and moving forward. #daffodils🌼 #daffodilseason #daffodils #flowers #spring #mentalhealth #mentalhealthawareness #anxiety #depressionawareness #headspace #mentalhealthmatters #mentalhealth #shotoniphone #iphonography
Wee date night with @ladybugberrie thanks to @jasminepotterystudios Great fun making my hobbies out of clay #datenight #clay #claymodelling #hobbies #fun #minatures #jasminepotterystudios
Spring is in the air #snowdrops #snowdropseason #spring #springisintheair #glasgow #glasgowlife #flowers #victoriaparkglasgow #parklife #sunshine #hope #hopeforthefuture #brighterdaysahead #brighterfuture
Loading Comments...
%d bloggers like this: